Howling at the Moon! 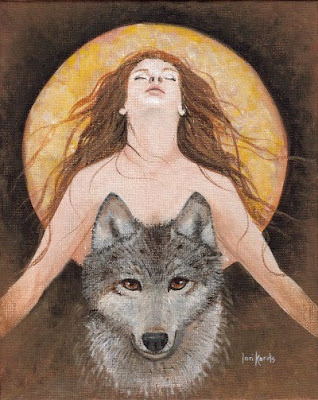 No, it's not the full moon yet but I'm howling anyway! You see, there's a reason for my short absence, and his picture is below.... 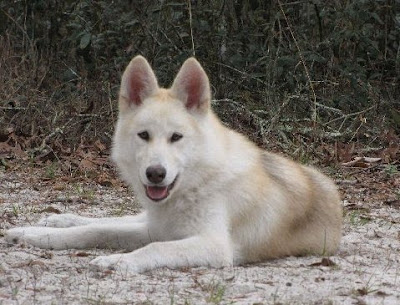 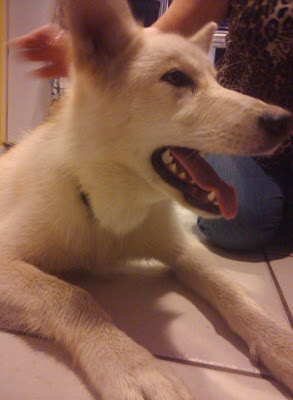 Meet Loki, my new wolf-dog puppy! Yep, you read that right, I adopted myself a wolf-pup! Now, those of you who know me in "real life" aren't surprised because I have been fascinated (some would say obsessed) with wolves for years now, ever since I read Women Who Run With the Wolves by Clarissa Pinkola Estes and felt an instant connection. Over the past few years I've volunteered at a wolf sanctuary and have given serious thought to adopting a wolf dog but didn't think I was ready yet. Well, two weeks ago this little guy's picture showed up in my mailbox with this description: 4 months old, loves the water, gets along well with cats and other animals. Is 90% housebrokenWhoa! We rarely have a pup come up for adoption and the fact that he does well with cats was a huge plus! After a quick consultation with the family we decided to go for it. So, the adoption process began. We were approved on Monday and made the hour and a half long drive last night to pick up our new baby!

I'm madly in love. Seriously. He is an absolute angel. A big, furry, messy angel but an angel nonetheless! We named him Loki after the mischievous Norse god..grin...from what I can see so far his name suits him perfectly! Here he is below with a couple more family members, Presley & Lucy. 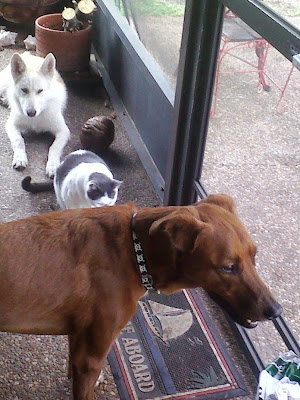 So, if I'm absent in the next few days don't worry. I'm just busy exercising (walking Loki, mopping the floor after he & Lucy track in mud) and cooking (well, not exactly cooking as Loki eats raw meat in addition to his kibble) and getting to know our new bundle of joy!

P.S. I should have clarified, Loki is a wolf-dog of "low-content", not sure how much wolf and how much dog as we don't know his parents. He was dropped on the side of the road as a baby and has been fostered ever since. I'm sorry for him but awfully glad he's mine!
Posted by Michele at 1:56 PM