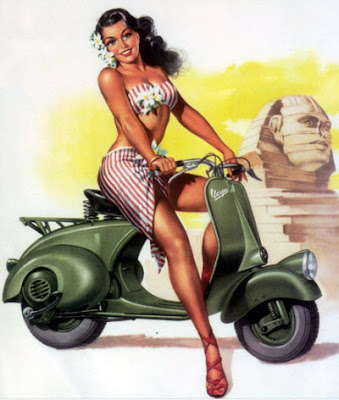 Beren and I are in Ormond, enjoying the annual Daytona Bike Week. It's my 5th year attending, am enjoying every minute of it! As I've said before, Beren and I do not have a motorcycle and don't intend to buy one but we have a blast hanging out at the local biker bars and, of course, wearing biker attire. *wink*

Yesterday we stopped at our favorite beachfront restaurant, the Ocean Deck, for some lunch. I had the Mahi sandwich but asked for it as a wrap to save some carbs, ate half of it along with a few fries.

Now, Beren didn't worry about saving fat/carbs/calories, he chose the Monte Cristo. Take a look at this thing after Beren finished it! Yeah, this is the half that was still left over! What a monster, right? From a bit of research on the 'net, I've determined that this baby weighs in at somewhere between 600 - 1,000 calories, depending upon who's counting. I have no idea about the fat but with all the gooey cheese and the fact that it's deep fried, am sure the numbers are staggering! Anyway, he thoroughly enjoys it and it's not something he has every day so I encourage him to go for it!

Of course it's not all about the food, Daytona Beach provides other..uh...treats as well! Despite the 40 degree weather, this hunky surfer braved the cool weather in order to run down the beach. mmm...yummy!

After lunch we headed to Main Street for some live music at Boot Hill Saloon where we encountered biker babes of every shape & size. This gal especially impressed me, love the B*I*T*C*H anagram on the back of her shirt!

Now, Boot Hill is one of the bars where ladies are invited to shed their undergarments should they feel so inclined, then the bar will "display" them. I myself have never participated because I like my pretty underthings too much to share them!

And speaking of pretty things, how about this corset top that I just had to buy from a streetside vendor? Isn't it adorable?? It was too cold to wear outside but Beren enjoyed it anyway.

Ok, this biker wanna-be has to run now, time to hop in the convertible and head out for another afternoon of fun. See you later!